For instance, let’s check the new assembly Microsoft.xrm.sdk.dll part of the CRM SDK 2015:

The good news are… we still can make compatible the Developer Toolkit with the latest CRM SDK 2015 editing the .NET Framework in the corresponding projects of our Visual Studio solution. Let’s say we have the next CRM solution: 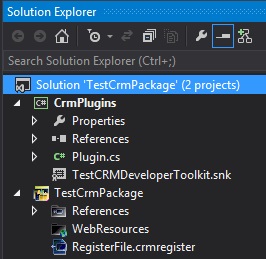 For plugins and workflows, we should update the references to the new assemblies and also the .NET Framework in the project properties:

After updating those references, we could still find the following error:

“The type or namespace name ‘Xrm’ does not exist in the namespace ‘Microsoft’ (are you missing an assembly reference?)”

This error is indicating you haven’t got installed the expected .NET Framework 4.5.2. Do right click on the same project and select Properties to check the version actually used:

If you are only getting old versions of the Target Framework, select “Install other frameworks…” that will take you to the next site:

After it has been installed, you get a new option in that previous list: 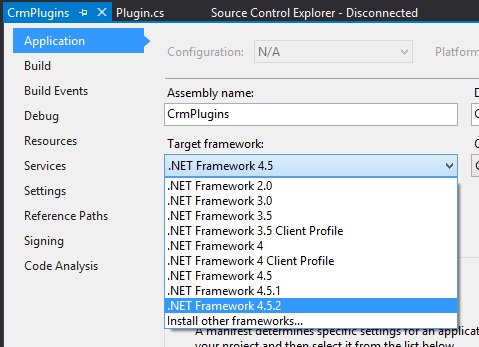 Finally, we need to do something similar with the CRM Package Project. But in this case, we will have to edit the project file and update the entry “TargetFrameworkVersion” to “4.5.2”. Start unloading the project: 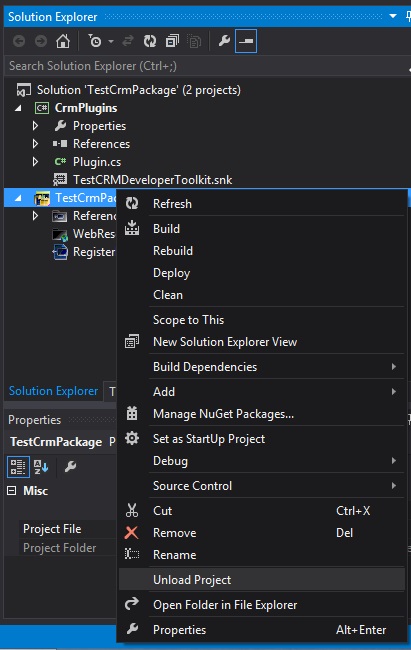 Finally, reload the project again and everything should work now!

About this last part, I would like to say thanks to my CRM MVP colleague Scott Durow (@ScottDurow), who helped me to find that entry.

If you don’t update the package project, it may still compiled, but the actual deployment will fail and you should see the next warning in the Visual Studio output:

warning MSB3275: The primary reference “[Your Assembly Name].dll” could not be resolved because it has an indirect dependency on the assembly “Microsoft.Xrm.Sdk, Version=7.0.0.0, Culture=neutral, PublicKeyToken=31bf3856ad364e35” which was built against the “.NETFramework,Version=v4.5.2” framework. This is a higher version than the currently targeted framework “.NETFramework,Version=v4.5”

Software Engineer specialised on Microsoft Technologies with experience in large projects for different industrial sectors as developer, consultant and architect. I enjoy designing and developing software applications, it is my job and one of my hobbies. I’m interested in design patterns, new technologies and best practices. Making those part of the ALM process is a great challenge. Since 2008, I have been working with Microsoft Dynamics 365 (CRM back then), the Power Platform and Azure. I customise and extend the platform to provide tailored solutions and integrations based on service-oriented architectures and messages queuing. Motivated by community events and contributor in blogs, technical books, open source projects and forums, I was awarded Microsoft Business Applications Most Valuable Professional (MVP) for 7 years. View all posts by Ramon Tebar